A story that circulates among UPS (Underwater Photographic Society) members is that a place so pure, untouched and overflowing with life that it

only exists in legend and rumor. It is a spot that boats rarely schedule and even more rarely reach.

About 7 miles west of San Nicolas Island, say 60 miles or so from the mainland, are some basalt crystals sticking just above the surface. They are the modest remnants of an ancient volcanic core. These things are stiffer than a life sentence! Subject to a moderate current, this site is something photographers dream and a divers challenge. Exposed to the open ocean, it makes Begg Rock rarely divable. Some regard it as a 'Unicorn of dive sites'.

There is more than one pinnacle, but only one consistently sticks above the surface and that one is about 10 feet tall and about 20 feet across by 5

feet wide at the base. There is another large wash rock about 50 feet away. 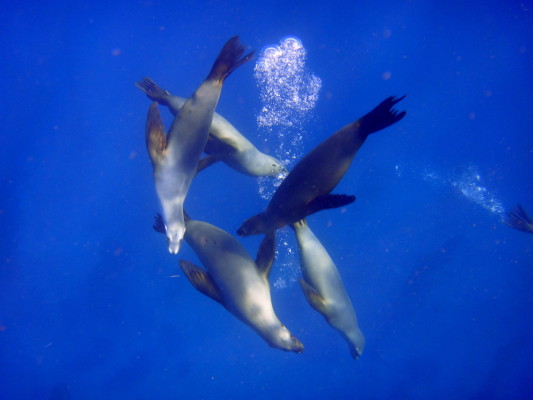 This is an area accessible pretty much only by dive boats and not many of those try it. After the minimum 6 hour ride there, the skipper has to decide if it is divable for the group on the boat. Then they have to anchor far enough away to be safe, but close enough to find bottom. Did I say that most of the dive site is vertical and surrounded by very deep water? A dive boat will try to get in near enough to drop anchor on the ledges at 40 feet, then they must back up with the current into deeper water. The anchor may be in 40 feet, but the boat is in 300 feet of water. This should be considered an Advanced Dive Site and is only open to divers with an Advanced Open Water certifaction.

Don your gear, enter the water with a step out the front gate and drop down the front anchor line. It is absolutely the best way down. The visibility is going to be 60-100 feet, or more! It may change greatly with depth. As you go down the anchor line, the reefs will appear and at some point, depending on current and your plan, you drop the line to hit the side of the reef that starts at about 40 feet.

For a typical dive, you want to start deep and work your way up. I had been told about the giant scallops and wanted to take some pictures. So I immediately went down to about 60 feet and looked around. The wall of the rock was covered with color filter feeders. At this point, there were Corynactis anemones, feathers, mystery critters and large scallops flat on the rocks. Most of these animals are very colorful, especially from close up. There were big scallops here, so what about deeper? I've found scallops well below 60 feet, there were hydrocorals in places and still the bottom growth was lush, but not as developed as I had seen at the shallower depths. I looked around and saw few scallops, but nothing of great interest at 80 feet. This whole time, I was trying to get some quick pictures of the anemones and fans. There is little cover in the rocks, so there are relatively few fish. I saw only a few small rockfish and a small Sheephead. As I came up to 70 feet, I got into about a 20 foot square of pure white Metridium anemones. These are from 6 to 10 inches tall and 2 to 4 inches in diameter. It is like you are suddenly diving 300 miles further north. I traveled carefully, as they seem so delicate. This is not a site for those who have issues or problems controlling their buoyancy!

As I continued up, there was unusual movement in the water. I could feel things vibrate, perhaps as if a really big swell were passing overhead. It had been going on for a while as I had been moving up the face of the pinnacle and I didn't really like it. I backed away from the rock about 4 feet and it lessened considerably. Realize that moving 4 feet from the rock, may put you above 200 feet of water. What I figured out is that the movement of the ocean moving past the rock caused so many eddies and movements in the water, right next to the rock, that it felt to my body as if something big was happening. Once understood, it did not cause nervousness, but it was not something to be completely ignored.

From about 60 feet, up to 40 feet, is the main area where the big scallops sit flat on the rocks. These are firmly attached to the rock by the bottom of the shell. Often, scallops found in Mexican waters are like this. As I continued up, around 40 feet I encountered some ledges; Though the main reef is mostly vertical. I encountered mussels at 40 feet and huge Pisaster starfish that feed on them. Even shallower are patches of the purple urchins (Strongilocentrotus purpuratus), Gooseneck barnacles and large green anemones. It is divable on a calm day, but looking around, you can tell that a calm day is an oddity. The water is really moving!

Be aware, that as you get into the shallower water, anything above 40 feet (depending on what is going on around you), you get into a vertical surge. Like the other 'vibrations' deeper down, it gets worse the closer to the rocks that you are. As the swell feels the rock, it may move you up 5 feet, maybe more! Use caution!

I've gone to Begg Rock a number of times, sometimes we got to dive it, sometimes you can't get there. If it looks good on the surface, there may be currents that can prohibit diving. If the dive boat has a nice inflatable skiff, it can make the difference whether or you can dive or not. There are few places you can dive pinnacles in the open ocean. The life you will see at Begg Rock is astounding! It is amazing that you may be happily hovering in your own world at say 60 feet, engrossed in the life and beauty around you!