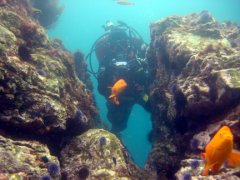 The western most of the Northern Channel Islands is San Miguel . San Miguel is influenced by the cooler, nutrient rich California current which resultsin cool water temperatures (55-60 F.) and marine life typical to what you would expect to find in the central California coastline. Here you may see Wolfeels, BIG halibut, HUGE Bugs, and very lush invertebrates and nudibranchs. One of our favorite sites here is Wilson Rock, a remote pinnacle offering great gaming for rock fish and halibut plus some of the best macro photography opportunities at San Miguel.

Because of its location in the open ocean, it is subject to high winds and lots of fog. The island is a tableland of lush grasses and wildflowers, with 27 miles of jagged, rocky coastline dotted with sandy white beaches. The westernmost of these beaches, Point Bennett, is the only place in the world where up to six different species of pinnipeds (seals and sea lions) can be found. 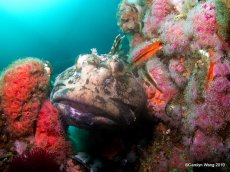 San Miguel is famous worldwide for its pinniped viewing. In the winter, as many as 50,000 individual seals and sea lions can be seen at one time on Point Bennett, where they breed and where the pups are born. Other wildlife includes the island fox, a species that is found only on the Channel Islands. Spring and summer the skies are filled with sea and land birds. Fossil bones of the Pleistocene pygmy mammoth, archeological sites of human habitation more than 10,000 years old, and a memorial to Juan Rodriguez Cabrillo, the European discoverer of California, are all found on the island. A geologic feature called the caliche forest attracts many people. This ghost forest was formed by caliche sand castings of plant roots and trunks. Today the plants are long gone, leaving behind the eerie stone replicas. San Miguel wildflowers are spectacular, due to the abundance of fog and moisture.

In the spring and summer the skies are filled with birds. Boaters entering Cuyler Harbor receive a greeting from western gulls, California brown pelicans, cormorants, and Cassin's auklets that nest on Prince Island. Black oystercatchers, with their bright red bills and pink feet, feed along the beach. Terrestrial residents include the western meadowlark, rock wren, and song sparrow, an endemic subspecies.